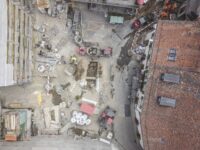 The excavation of the Kurplatz square in downtown Baden, Switzerland, has revealed even more remains of the city’s ancient Roman baths, altars and a sacred building. At the western end of the square near the most important of the mineral springs, archaeologists discovered a large amount of rubble rich with architectural fragments like cornices and altar stones. These are the remains of a cult building once associated with the baths. 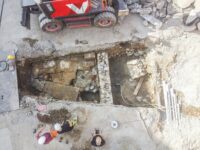 The Roman spa town Aquae Helveticae, renamed Baden in the Middle Ages, grew around the hot mineral springs in a bend of the Limmat river. They are the warmest and most mineral of Switzerland’s thermal springs and were considered by the Romans to have healing properties.

Cult buildings in the immediate vicinity of a thermal spring were not uncommon in Roman times, but the rule. As numerous examples from Gaul, Germania and Italy show, the use of thermal water for healing purposes was closely inseparable from ritual acts. […]

The new finds now show a sacred building in which several altars stood and in which votive offerings were deposited. In addition, a fragment of a monumental inscription was found in the rubble, which was probably previously walled in a building. The inscription is currently being analyzed by experts. The inscription may name the founder and addressee of the associated building.

When excavations in the Kurplatz began this spring, archaeologists discovered a Roman bathing basin (late 1st, early 2nd century) later connected to the St. Verena Baths built in the Middle Ages and in continuous use as a public bath until 1840. The basin and conduit from the St. Verena Baths will be excavated further in the next few weeks.

This entry was posted
on Friday, October 23rd, 2020 at 11:50 PM and is filed under Ancient.
You can follow any responses to this entry through the RSS 2.0 feed.