Archaeologists have discovered “witches’ marks” on the remains of the medieval church of St Mary the Virgin in Stoke Mandeville, Buckinghamshire, England. Two stones were found that were engraved with a symbol of a circle containing lines radiating from a central drilled hole. These are believed to be witches’ marks, symbols of apotropaic magic that ward off harm and malign influences by entrapping them in a maze. Similar signs have been found on buildings all over Britain, and in some cases can be reasonably interpreted as sundials use to keep time in church. The St Mary’s marks, however, were found in the walls of the west buttress practically at ground level. There was no sun going to be hitting that stone to make it work as a timekeeper. 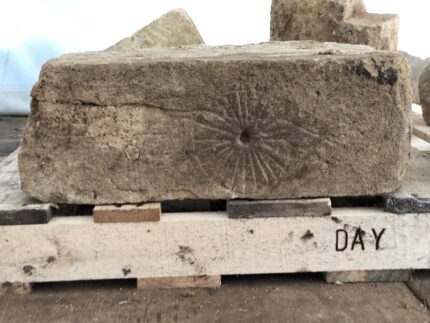 The team has been excavating the site of the long-demolished church to salvage any archaeological and human remains from the church’s burial ground in advance of construction of the HS2, a new high-speed railway connecting London to Scotland and 25 stops in between.

Detailed research into the structure of the church has allowed archaeologists to piece together a history of the development of St Mary’s. The church started off as a chapel built in about 1070, shortly after the Norman Conquest and may have been at first the private chapel belonging to the lord of the manor at that time. The church was soon extended, and an aisle added in the 1340s. These new additions seem to mark a transition from a chapel used for private prayer to a church that was used by the local villagers.

The church was replaced with a red brick parish church in the village proper in 1866 and the old one on the outskirts of town fell into disrepair. It was condemned in the 20th century and demolished in 1966. Unfortunately the demolition was not documented at the time, so archaeologists had no idea what might be left of the church. Much to everyone’s surprise, a significant section of the 14th century church was still there. The floors are intact and the walls stand almost five feet high.

The entire church is now being excavated and carefully dismantled. Work is expected to continue into 2021, and they may find even more once of the medieval remains have been raised, for example a Saxon church that may have existed on the site before the Norman chapel was constructed.

HS2 will be hosting a webinar on the archaeological finds at St Mary’s on Wednesday, October 28th, at 12:15 GMT. If you can attend live, you can ask the archaeologists questions via chat. The session will also be recorded and posted on HS2’s YouTube channel after it airs. There are several previous webinars about the archaeology of the HS2 already uploaded to the channel.

See the church rebuilt in this CGI rendering:

This entry was posted
on Saturday, October 24th, 2020 at 10:38 PM and is filed under Medieval.
You can follow any responses to this entry through the RSS 2.0 feed.