The American descendant of that autograph album from 17th century Germany doesn’t have its lavish illustrations, but its signatories are even more famous, covering in their lifetimes the entire span of US history from the presidency of George Washington to that of George H. W. Bush. The pre-sale estimate for the “most remarkable autograph album ever offered for sale” is $30,000-35,000, but the live auction  is still a couple of days away and the online bids are already up to $26,000.

It was compiled over the course of 50 years by Lafayette F. Cornwell of Yonkers, New York. He began collecting autographs when he was a teenager and continued for the rest of his life. Unlike any teenager I’ve ever known but very much like his fellow 19th century teen autograph collector Adeline Harris Sears, he planned for the long-term, deciding to arrange the signatures by category rather than chronologically. The result is the names, like those in Adeline’s incredible Signatures quilt, grouped by field of endeavor instead of chronologically. 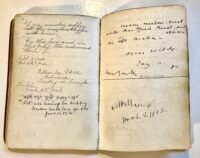 Most signature albums at the time were limited in scope, often focused on political figures like senators and cabinet members. People with connections or good luck managed to get a bunch of big shots to pass the book around and sign it. Cornwell’s autographs include the names of many nationally prominent politicians, but collected over decades in many places, and the names of famous people from all walks of life — presidents, first ladies, inventors, social activists, military leaders, entertainers, writers, scientists, aviators, musicians, opera singers, explorers, cartoonists, industrialists, lawyers and statesmen.

Born in 1863, Cornwell was 17 when he began collecting autographs in December 1880, leveraging his location in New York state to get access to famous people visiting New York City.  King Kalakaua of Hawaii signed in 1881 on a trip to New York. So did Oscar Wilde and US President Rutherford B. Hayes (the first time; Hayes signed twice, for some inexplicable reason). Frederic Batholdi, sculptor of the Statue of Liberty, signed in 1886 when he was in town to see his masterpiece unveiled in New York Harbor.

It wasn’t just the ability to stalk celebrities at the country’s greatest port of call that filled the pages of Cornwell’s autograph book with such an astonishing depth and breadth of signatures. In 1889, he moved to Pueblo, Colorado, where he would open the Cornwell Jewelry Company shop in 1896. He made a name for himself as a jeweler and watchmaker of great skill. He was made assistant chief watch inspector for the Denver and Rio Grande Railroad, Missouri Pacific, Colorado and Southern Railroad, so he traveled widely, fixing railroad employees’ watches to keep the trains running on time and doubtless encountering a passel of notables on his journeys.

Even during Cornwell’s lifetime, his remarkable album received well-deserved recognition when it was featured in the “New York Times” Sunday magazine section of November 13, 1927. The unnamed reporter describes how Lafayette Cornwell, a (former) jeweler from Yonkers, NY, managed to gather the signatures of no less than eight presidents (Grant, Hayes (twice!), Arthur, Cleveland, Theodore Roosevelt, Taft, Wilson and 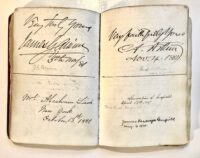 Hoover) and several First Ladies, including Mary Lincoln (who signed the album with a very rare form of her signature, “Mrs. Abraham Lincoln”). In addition to Union and Confederate Generals, admirals, WWI aces, explorers, opera singers, or inventors like Steinmetz and Edison and celebrities including Houdini, Valentino and “Buffalo Bill” Cody, many famous women are also represented: Lucy Stone (who penned, “The consent of the governed woman is as necessary to the success of the principle of a representative government by the people as is the consent of the governed man”); Helen Keller (“Keep your face to the sunshine and you cannot see the shadow”); Jane Addams (“The new Humanitarianism! The Progressive Party!”); and the great thespian Sarah Bernhardt whose autograph Cornwell obtained only after agreeing to her specific demand. As the “Times” reports: “Sarah Bernhardt’s signature was placed last, at her own insistence, Mr. Cornwell says. The French actress received him in her private [railway] car at Pueblo, Col., while on her American tour in 1911, and granted his request—but she specified: ‘I write the last! No one must write after me!’ So the great French actress placed her signature on the last flyleaf in the album and, to make assurance double sure, pasted the flyleaf to the back cover,” There it still remains, permanently affixed to the back cover, more than 100 years later.

There are more than 400 signatures in Cornwell’s autograph album. He gave the book to his niece Mabel in 1933, two years after the last dated signature and 12 years before his death. In a letter to her that is also included in the auction lot, he wrote an encomium to his life’s work.

“To my dear Niece, Mabel Bentley Barteau, 17 Livingston Ave. Yonkers, NY…To you I take great pleasure in presenting this Book of autographs of distinguished persons in all walks of life and various countries. It represents many years of strenuous efforts and the traveling of many thousands of miles and much expense in meeting and securing of the autographs of the persons of note here inscribed and the sentiments they express. Wishing you a Merry Christmas and a Happy New Year, Your Uncle, L.F. Cornwell.” 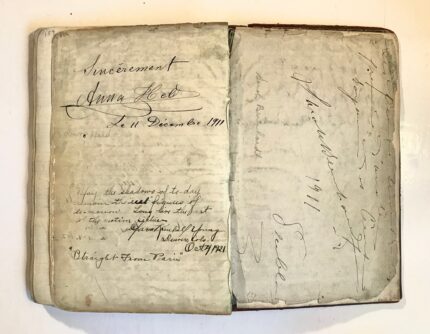 This entry was posted
on Monday, October 19th, 2020 at 11:41 PM and is filed under Modern(ish).
You can follow any responses to this entry through the RSS 2.0 feed.