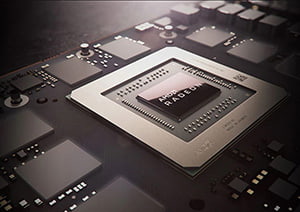 One of the more interesting GPU launches in recent history (probably ever) was that of AMD’s Radeon RX 5600 XT in 2020. This graphics card was intended to compete with Nvidia’s popular mid-range GeForce GTX 1660 Ti, which it did.

What AMD didn’t count on was that Nvidia countered by lowering the price on its reference RTX 2060 Founder’s Edition to less than $300. Not to be outdone, AMD responded by revising the reference specifications for its newly-released mid-range GPU – on the night before the launch.

Unfortunately, though not surprisingly, all partner manufacturers could not implement the higher clock speeds on less than a day’s notice and in some cases not ever. For one thing, some of the memory chips on the already-shipped cards didn’t qualify for the higher bandwidth. Some manufacturers solved the problem (sort of) by segmenting their RX 5600 XT models into different performance tiers. Others re-released new revisions of their cards at a later date.

Which brings us to today’s situation, where different models of the mid-range Radeon card differ quite a bit deal in terms of performance. If the VRAM and core clock speed upgrades are both considered, you will often see a 5-10% difference in gaming frame rates.

Since most Radeon RX 5600 XT cards are priced about the same – although some are significantly faster than others – it’s even more important than is normally the case to double-check that you are getting the most FPS out of your GPU investment. A few of the highlights from an absolute performance, value, or form factor perspective are:

If you are looking for the fastest RX 5600 XT card out of the box, the Asus ROG Strix Radeon RX 5600 XT Top is it. This card offers the highest maximum boost clock of all the contenders and ships with 6 GB of GDDR6 VRAM running at 14 Gbps. But while it’s been awarded top scores in the performance department, it is also priced a fair bit higher than most of the alternatives.

The Sapphire Pulse Radeon RX 5600 XT (non-‘BE’) strikes an excellent balance between performance and value. At the time of writing, it’s one of the most reasonably priced RX 5600 XT cards, but nevertheless ships with 14 Gbps VRAM, as well as higher game/boost clocks than competitors such as the XFX RX 5600 XT Thicc II Pro. It also includes a dual BIOS solution for safe flashing and a more-than-decent dual-fan cooler. Note that there’s also a Pulse Radeon RX 5600 XT BE, which is a bit slower out of the box and lacks the dual BIOS feature.

For small form factor ITX builders, the PowerColor Radeon RX 5600 XT ITX is actually your only option if space is limited. This is a very compact, single-fan card with lower clocks than many dual-fan alternatives, but it does come with 14 Gbps VRAM.

So, you’re currently in the market for the best RX 5600 XT card based on specs and performance, make sure to read up on whether the card ships with AMD’s updated reference specs out of the box – or can be brought up to speed with a new BIOS. The following is hopefully a complete overview of the currently available models and their status at the time of writing.

If you don’t mind getting a slower version of this card, that is of course also an option, but know what you’re paying for. Everything else being equal, a card that may actually be about 10% slower than the fastest RX 5600 XT models should also cost about 10% less.

Now for a detailed look at what the usual manufacturers have on offer, in alphabetical order. 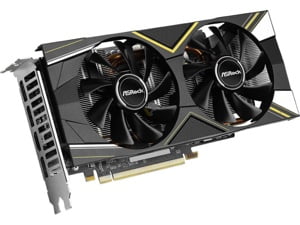 ASRock announced BIOS updates to all of its three initial RX 5600 XT models in the middle of March 2020. When updated, the VRAM is set to 14 Gbps, while the maximum boost clock is set to 1750 MHz. In July 2020, ASRock added the triple-fan Challenger Pro version of the card, which doesn’t need to be updated since it comes with faster VRAM out of the box.

In terms of clock speeds, only the triple-fan Phantom Gaming D3 6G OC stands out with a higher game clock (the expected average clock speed when gaming) at 1670 MHz versus the 1615 MHz you get with the Phantom Gaming D2 6G OC and the Challenger cards. 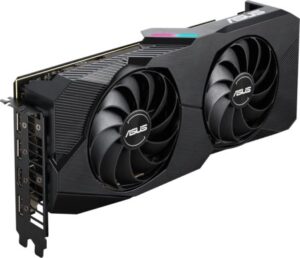 The RX 5600 XT comes in all of the usual varieties from Asus, including triple-fan TUF and ROG Strix cards as well as a Dual (fan) model. You can BIOS-upgrade the TUF to 14 Gbps VRAM, but the Dual model stays at 12 Gbps. A somewhat disappointing development is that Asus has opted to keep some Strix cards (e.g. A6G version) at 12 Gbps while offering alternatives that come with 14 Gbps VRAM out of the box (T6G model).

There are also a few other varieties of the Strix lineup, so it’s a good idea to double-check the specs if you want to steer clear of the slower cards. 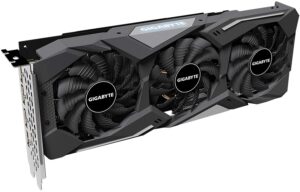 For now, there is one dual-fan and one triple-fan WindForce RX 5600 XT model from Gigabyte. However, both are available in a few different varieties. Other than the non-OC version of the dual-fan card, all Gigabyte cards come with a slight factory overclock and either 14 Gbps out of the box or via a BIOS update. The (very uncommon) non-OC model uses the original RX 5600 XT specs and is therefore significantly slower than the other Gigabyte cards with the same GPU.

Note that the second revision (Rev. 2.0) of these cards have the same SKU but will not require a BIOS update to achieve the higher memory frequencies. 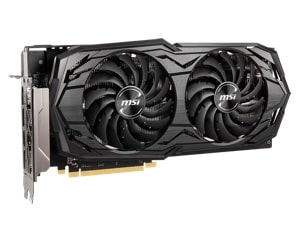 MSI has one of the more convoluted RX 5600 XT lineups. Not only are there several varieties of each card – some have also been added to the lineup post-launch, some of which replace previous models. On the plus side, all of the RX 5600 XT cards should now be either equipped with 14 Gbps VRAM out of the box or eligible for an update.

The original lineup included the Mech (OC) and Gaming (X/Z), which have since been joined by the Gaming M/MX. All are dual-fan cards and the main differentiators are gaming/boost clocks and cooler layout. Due to the broad range of factory overclocks, the out-of-box performance difference between the various MSI cards is quite significant. To update any MSI video BIOS, use the Live Update or Dragon Center utility. 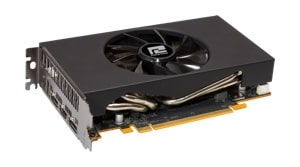 PowerColor was one of the first manufacturers that responded to AMD’s last-minute update of the RX 5600 XT specifications. All of the initial cards, including the Red Dragon and Red Devil models received BIOS updates to increase VRAM performance from 12 Gbps to 14 Gbps. At a later date, the manufacturer added a slightly more compact dual-fan card with a plain PowerColor branding, which currently ships in a second revision – also with 14 Gbps VRAM.

If you are looking to build a small form factor gaming PC based on the RX 5600 XT, PowerColor also offers the only single-fan variety of the card. This compact ITX version doesn’t compromise much on performance with its 1560 MHz game clock. Of course, the cooling will not be quite as efficient compared to a dual-fan card, and you also have to do without the third DisplayPort output that’s present on all other RX 5600 XT models.

For a change, Sapphire’s RX 5600 XT lineup is easy to keep track of for a change, as it only consists of just one card in two flavors – the Pulse RX 5600 XT and the Pulse RX 5600 XT BE. The main differences between the original and the BE model are that the original (non-BE version) comes with a dual-BIOS solution, higher clocks, and a slightly larger cooling solution with some additional design accents and an LED-it logo. 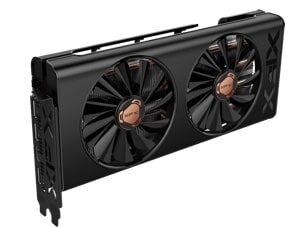 Last but not least, XFX’s range of RX 5600 XT cards is probably the hardest to wrap your head around. In terms of design and physical dimensions, there are just three different models. Unfortunately, the dual-fan Thicc II Pro and the triple-fan Thicc III Pro/Ultra come in several versions/SKUs with different specifications. This confusion is due to the fact that XFX reportedly had to re-release its RX 5600 XT lineup, as they couldn’t requalify the memory for 14 Gbps on its original stock. Some of the older 12 Gbps varieties may still be around on store shelves, however, so try to stay aware of what you’re buying.

As for the dual-fan Raw II, this is a budget design that was initially exclusive to Best Buy and is only available in a single, 12 Gbps variety.

Like most other manufacturers, XFX released a range of new BIOS files early on that offer enhanced clock speeds, but none of them will adjust the VRAM. In other words, cards that were originally at 12 Gbps will remain there.

How to Check Your Video BIOS

Most of the RX 5600 XT partner cards now ship with a BIOS that ensures that your graphics card will run at its final VRAM and core clock specifications. However, if you were an early adopter or managed to pick up a card running at the pre-launch specs, you may want to check if a performance-boosting BIOS update is available. The tables and discussions above should provide some hints, but to be on the safe side you should check with the manufacturer’s product and support pages.

Flashing a graphics card’s BIOS is not without risks – applying the wrong BIOS or having a power outage during the upgrade process will likely brick your card. Dual-BIOS cards are an exception, as these will let you choose which BIOS to use via a physical switch. Either way, always follow the manufacturers’ instructions and use their proprietary software when flashing.

To check whether your card might be eligible for an upgrade, you need to know what clocks it is currently running at. There are many ways to find out, but one of the easiest and most accurate methods is to use the lightweight GPU-Z software. 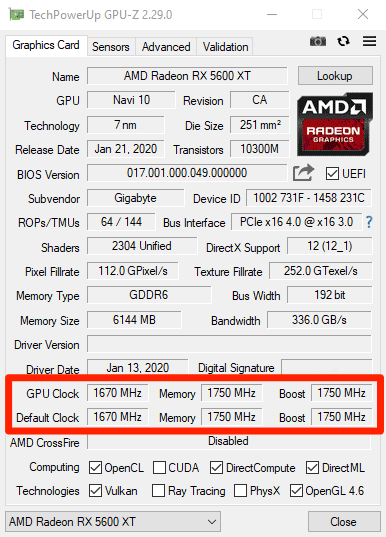 The highlighted part of the GPU-Z screenshot above shows the actual clocks that your GPU is running at. If they seem to match the (possibly updated) official specs, then you are good to go. If they don’t, a new BIOS is likely available. Note that memory (VRAM) speeds listed in GPU-Z are the base and not the effective clocks. In this case, 1750 MHz means that the effective speed is 14 GHz/Gbps, while 1500 MHz means 12 GHz/Gbps. 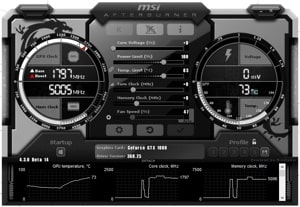 Even if your card is not eligible for a BIOS update, you will of course still be able to try a manual overclock. Just download an overclocking tool like MSI Afterburner (works with any brand) to get started. Based on the numbers discussed throughout this page, you will have some idea of what the RX 5600 XT is capable of. There are some limitations to GPU overclocking with a standard BIOS, however, such as locked voltages and clock frequency range limits.

But there are still plenty of performance gains to be had if you were lucky in the so-called silicon lottery and ended up with a quality chip. Contrary to some claims, normal overclocking will not permanently damage your GPU or void your warranty, but you will inevitably experience crashes once you reach the GPU’s upper limits. If you take a liking to GPU overclocking in general and MSI Afterburner in particular, also check out our customization guide for Afterburner.

As a summary, this is a sortable and searchable version of all the above tables combined, with all of the RX 5600 XT cards included.